An approach to decision making consistent with corporate values

SapereCoop is a project coordinated by the Social Policies sector of the National Association of Consumer Cooperatives and aims to promote education for conscious consumption in schools and on the territory.

It carries out articulated and multi-stakeholder interventions that involve, in addition to the Coops in their territories, many other cooperatives that deal with educational and social activities with which they dialogue and collaborate with the school world and institutional stakeholders. SapereCoop has 40 years of history behind it and every year it involves hundreds of thousands of students, from preschool to secondary school.

How can we make important decisions in an inclusive and effective way?

As one can imagine, the Covid-19 emergency has had a strong impact on SapereCoop’s planning, which resulted in the need of having to redefine some important points of its strategy in a radical way.

It is time for important and bold decisions, which look toward the future and take into account the interests and needs of all parties involved. How can one combine the need for a strong and decisive position with the participatory and collaborative approach to decision making that is coherent with the nature and tradition of the reality of Coop?

What is the goal?

A team of 15 people, representing different cooperatives, must develop guidelines that serve as a reference point for certain hot topics and then allow the various cooperatives, with which they collaborate on educational projects, to carry out activities independently in the area.

How did we work?

Following the steps suggested by Theory U, we started with an initial moment of deep listening and observation. We imagined the best possible future for this project and its numerous stakeholders. Then, starting from the identified goals, we focused on the intermediate steps to achieve them, and the leverage points of the various actors involved.

Thereafter, we worked according to the principles of Dynamic Governance, a decision-making process based on the principle of consensus which, similar to a choir, aims to play a melody that is the result of the harmonious interweaving of many voices. Dynamic Governance gradually integrates all stakeholders’ points of view, making decisions truly participatory and, at the same time, rapid.

The work proposed to the national group of the ECC has paved the way for dialogue and confrontation where different positions can coexist. All of them work together to define a common landscape, if we can call so the wider projectual space in which to give life to more targeted and specific actions.

The goal of this work was to maintain diversity, while at the same time preventing opposition. The method proposed and built with the guidance of Peoplerise has enhanced the convergences, and thus the willingness of a collective work, without compromises and with clear recognition of the contribution of each.
Easier said than done!”
Luisa Pilo, Sapere Coop 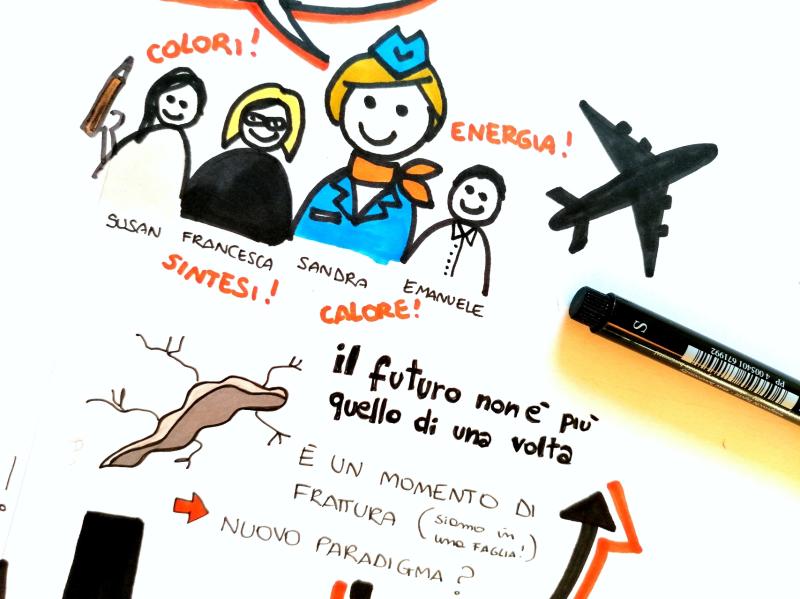 What are the results?

Our intervention with the consumer education group provided results at two different levels:

Over the course of our meetings, we achieved the results that the group had set out in advance, meaning, we finalized guidelines for the two most urgent issues. Together with the participants we agreed on the key points to work on:

– integrate the role of digitalization into the planning for the 20/21 school year.

At the same time, we held a meta-discussion on the method of decision-making that we were using. The workshop participants were able to learn the principles of Dynamic Governance by experiencing it first hand. As a result, they will have an additional tool to use in the future when making their own decisions!