FROM EGO-SYSTEM TO ECO-SYSTEM: SOME TECHNIQUES

the beginning of the transition from ego-system to eco-system

When I for the first time “landed” at the online course “U.lab: Transforming business, society and self“, organized by the Presencing Institute of MIT, I had a typical European detachment, and I felt that I would not easily let myself succumb to American practicality and megalomania… even more so if it had a German setting! (Because it’s a bit of megalomania).

Upon seeing the MOOC introduction video, a genuine trailer, in which Otto Scharmer announces that he wants to change the capitalist system, I laughed and thought, “he’s not the only one!”. However, by the end of the course, I realized that this now-dormant dream had regained strength and vigor within me as well.

the success of the course

The secret of the course’s great success (to date it has more than 100,000 participants, in 185 countries, most of them from China and India) lies in the concatenation of those three aspects present in its very title: “U.lab: Transforming business, society and self”. It therefore aims to link business, society and the individual. In my opinion, however, it is with the latter that Scharmer really plays his game.

After obtaining his doctorate in economics in Germany, Otto Scharmer went to MIT in Boston to collaborate with Peter Senge, a great expert in dynamic and complex systems (named among the one hundred most influential men in the world by The Economist’s Guide for his business and management ideas), who made public administrations, non-profit organizations and multinationals work together in the search for a socio-economic paradigm that was fairer, more equitable and sustainable in its relationship with the environment.

the awareness given by Theory U

As Senge himself confesses in an interview during the course, despite his extensive experience in the field, at that time he felt that he was still missing an important link – the one of awareness. And it is precisely Theory U developed by Scharmer that provides it.

If you look closely at the image of the U, you will notice that in the deepest part there is an oval. This represents what is called “The Source” in the original drawing (it is missing in the more secular Italian translation), and is a fundamental point of passage on the path to awareness.

And it is precisely the source/resource that Senge and Scharmer want to access, and to make us access through this path. Therefore, it is not simply a matter of organizing practical or “esoteric” exercises, but rather of making us understand that humans cohabit the earth with other animals, that they must re-learn to be its custodians and must meditate on what their highest task is, the one for which they were truly born. 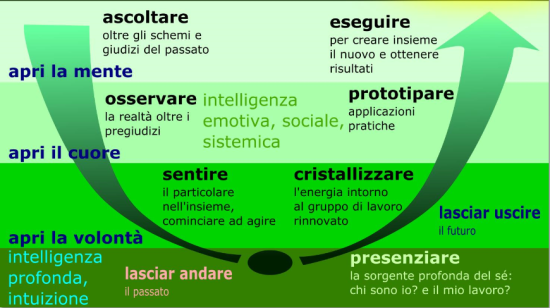 By taking the path represented by the U, Scharmer simply wants to make the individual aware of what he or she is and what he or she might become, thereby resolving the third disconnection; and he wants to encourage people to reconnect with each other, repairing the second.

The impetus of the course and the book leads us to understand that only if the third disconnect is recomposed will we truly learn to act together and meet the other two needs.

Each one of the live-streaming sessions organized during the course, corresponding to the three main phases of the U, ends with questions that push participants toward a self-awareness, sometimes tender, other times edgy and poignant.

Obviously, this self-awareness is deeply connected to the way we relate to others, which is attended to through the practice of listening.

Below are the four possible levels of listening:

To practice listening, the first practical exercise required of the MOOC participants is to observe their listening levels each day, reflecting on where, when, and why these change. They log these observations day by day on an online chart, which allows them to monitor their progress over time.

A second exercise (“empathy walking“) consists of interacting with a stranger who lives in a world as distant as possible from the one of the participant. This is to try to get to have a deep and empathic listening (third level) with the stranger.

The third activity, probably the most difficult but the most interesting, is to change the usual level of listening with someone who is close to you. In this way, you can learn how the levels of listening can change the nature of your relationship with this person.

It is through the modulation of these dialogic details that version 4.0. of Galileo Galilei’s telescope (see previous article) is activated and we begin to understand how we ourselves create our worlds.

And it is precisely in order to shift the focus of our attention to ourselves and our relationship with others that weekly coaching circles (virtual groups or groups with 5 peers) are organized. They aim to practice the third and fourth levels of listening together. Similar to the daily listening exercise, the coaching circles accompany the participants throughout the duration of the MOOC.

Within these circles, the U-curve repeats itself. At each meeting, a participant describes a case that significantly affects him or her for 10 minutes. Other participants ask questions of clarification for 5 minutes. Then, a 3-minute pause of silence as the listeners think about the presenter’s emotions, metaphors, and gestures. Using these clues, they then give back in 10 minutes their interpretation of the illustrator’s relationship to the case.  In this way, as if in front of a mirror, the case presenter receives four interpretations of his or her actions. Thus the presenter understands how the own behavior can be interpreted from different points of view. The presenter evaluates these interpretations, accepting them, rejecting them, suspending judgment for ten minutes.  In the last twenty minutes, a usually extremely generative dialogue is sparked.  These circles become progressively deeper where participants have the courage to accept and show others their vulnerability.

In the last post on this topic we will show how the micro level of interaction can reverberate at the macro level.

*Susan E. George “English, Celtic, Neapolitan. A diviner and theatrist who has forgotten her past as a university professor. President of the degree course in Public, Social and Business Communication at the University of Pisa. Fascinated by the importance of dialogical modalities (also the subject of her research) in the creation of organizations that are willing to learn by learning”. 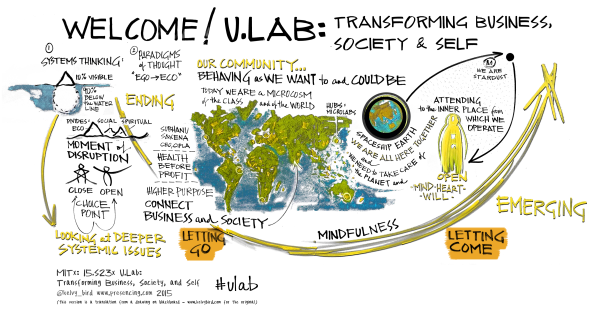