“SELF MANAGEMENT? YOU CAN DO IT IF YOU WANT TO”

Interview with Astrid Vermeer, the author of Self Management

Her book has already been translated into English, German, Italian and French – with editions in Russian and Japanese on the way! The practical guide that illustrates step by step how to introduce self-organization and distributed leadership into companies is finding fertile ground in a variety of locations across the globe. In this interview Astrid Vermeer explains why she and Ben Wenting wrote Self Management. How it Does Work published in Italy by Guerini Next with the book’s preface and Italian translation by Peoplerise. 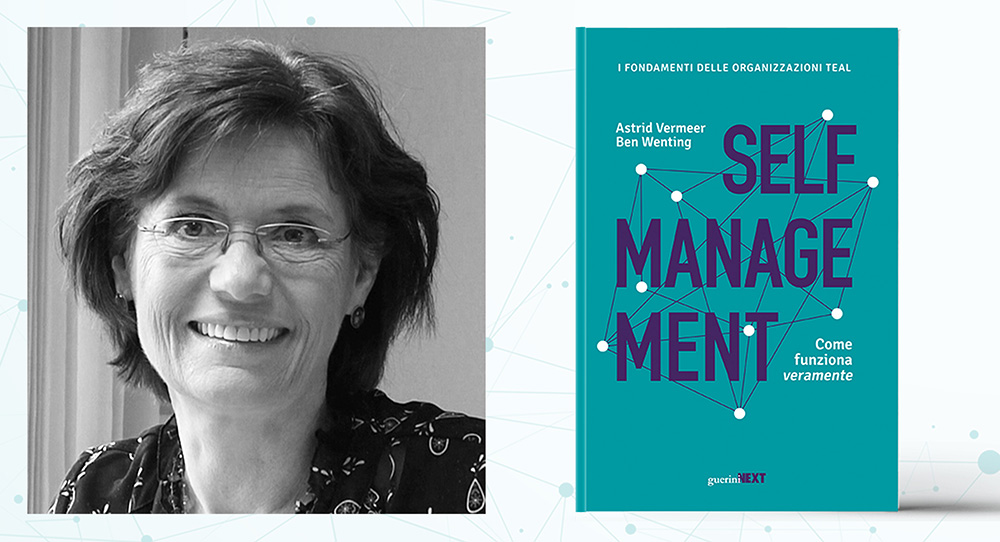 Did you run into any problems while drafting the book?

“We wrote about the issues we already deal with at work and we wanted the book to be very practical. The only problem, if you want to call it that, was finding the right balance. We wanted to write in general terms in order to touch upon all types of organizational functions but we also wanted to be able to offer specific advice and to give our readers the opportunity to follow our method”.

How has the public’s reception been so far?

“The book was written in Dutch originally. But then we realized it had generated a lot of interest outside of Holland as well. We are doing presentations all over the world: in Switzerland, France, Germany, the UK, Canada, the USA, Australia and Italy. Many people have told us that the book is easy to read and sensible. And if you put the advice to use, you can really implement self-organization. It has also been called a user-friendly book”.

As a matter of fact, the book provides a general overview, details regarding the process and potential glitches for each topic covered. It also offers an in-depth analysis of questions that could come up during the crucial stages of the transformation as proof that creating a workplace which has more trustworthy relationships, a deep-seated affinity and a meaningful goal to pursue is undeniably possible.

What is the reaction of sceptics to self-organization?

“Many people have said ‘Yeah, well this thing might work in Holland but we don’t have a suitable environment here in our country. We’re not ready for it yet’. But the truth us is that, on a cultural level, we’re not ready in Holland either. But there are plenty of managers who want to work in an organization that is more democratic and they want to work more harmoniously with their colleagues and teams instead of trying to be in charge all the time. But they don’t know how to make that happen. And, since they don’t know how to go about it, organizations continue being hinged on hierarchies. But once you find out that there is such a thing as a different way to create organizations and work together, then you’re good to go. I don’t think culture is a good excuse to not start. In every country we have been to so far, the people want to work better together on all organizational levels.

So is it a question of fear?

“No, it’s not about fear. Essentially it’s a matter of not knowing how to do it. The majority of managers are taught how to be in charge of and design solutions for their staff members. They don’t learn how to work with them. Everybody thinks they’ve got to direct their efforts in one single direction: a manager has to decide for everyone else. But this isn’t true. There’s no law out there stating this. If you’re a manager you can make things easier for people and develop solutions alongside your staff by talking things over and considering what others have to offer. Trying to find something constructive and beneficial for the organization is what is best for your staff members. It’s really quite simple and yet it is such an uncommon approach that people think it can’t be done. But it can. All you need is people who know what to do and how to do it. How to put it into practice and how to discuss the issues that come up. You can do it if you want to”.

“After that, it’s a matter of developing this skill and standing by your own way of seeing other human beings. To the fact of acknowledging other people as colleagues and not objects to exploit”.

Astrid uses the Buurtzorg model to make her point. This Dutch company is the leader in the home healthcare industry at which she and Ben Wenting have been working for years. “The company isn’t just functioning ten years after having introduced the self-organization approach, it’s actually expanding. That’s because its founder Jos de Block has always believed in his choice and in what he does every single day. And if you can believe it, the development of this idea is carried out in a substantial manner”.

What is the message you wish to convey?

“While we were writing the book, in my heart I hoped that we would succeed in inspiring, motivating and directing people to do things in a different way. So, the message here is: try to concentrate on the fact that you could speak more (and better) with the people working with you instead of just controlling them. That you could start to see them as colleagues and not just as components of a production system. People are capable of making decisions. They do it every day. But once they get to work they feel like the independence they have in the personal lives cannot be applied on a professional level. Regardless of the fact that they know their professions – since they were selected specifically for their jobs. Even if many have received an education (and some at extremely high levels of education), they are not allowed to make any decisions. And I really don’t understand how this is possible because people are capable of thinking and using their knowledge and ideas. I’m sure of this”.

Is sustainable development in the equation?

“Yes. If you treat others as your equal and look for solutions, I believe that – no matter the problem at hand – people will be more sensitive to the fact that they are part of an organization or of society. When this is the case, they automatically feel more responsibility in terms of sustainability. The key is to empower people and make them feel responsible for what they do. To make them feel that they are important and needed and that they can make the difference. People want to be seen. We all do. And this is why people should talk more about the way the organizations they work at are being managed and how workers can be more gratified. For instance, young people today don’t just want a pay check. They want to be doing something that has some meaning and they want to be seen by the people they work for. So, organizing an employment situation for them in this sense is really important”.