The method that shows new perspectives

“People in general, but also groups and organisations, have a blind spot in their view of reality. This is due to the simple fact that, when we’re immersed in our everyday lives and our usual mental patterns, we all tend not to see certain aspects of what’s going on. Social Presencing Theatre uses physical representation of the roles and stakeholders in a system (e.g. a working team, a department within a firm or a whole organisation) to provide an opportunity to ‘watch from the outside’ and see what was previously difficult to see. And an awareness of new perspectives helps us to avoid repeating the same patterns of action and to find new possible actions”. 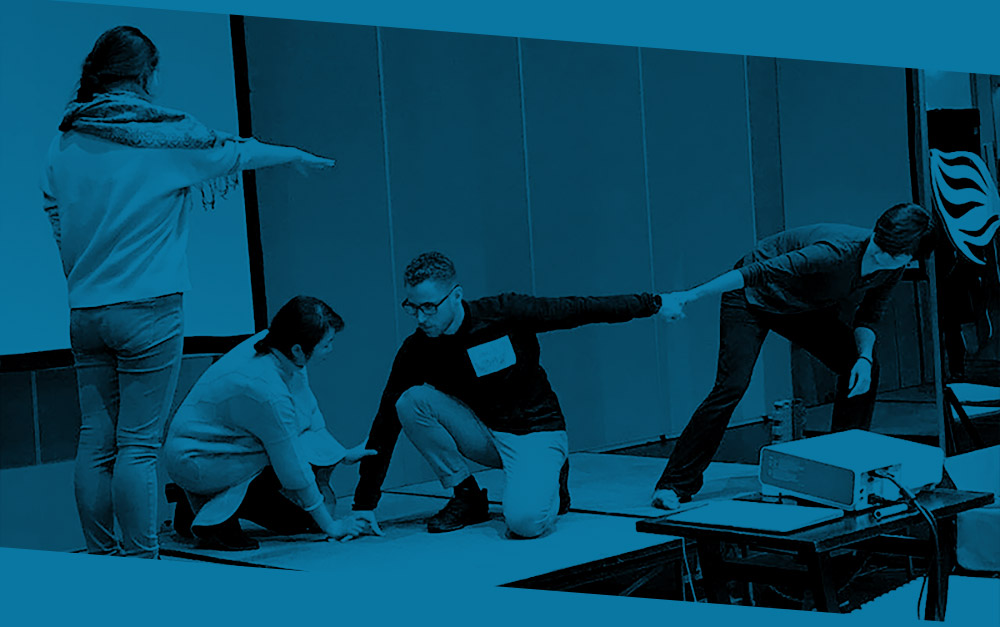 Telling us about this is Sandra Ermacora, a Peoplerise partner who recently, together with colleagues Francesca Natale, Maria Grazia Magazzino and Lara Belleardita, organised an experimental Social Presencing Theatre event at the Copernico business centre in Milan; the subject of the performance was the Italian National Health System.

“It’s a method we use with firms”, Sandra explains, “to get people and groups to become aware of aspects which they had previously not considered or had seen differently. It’s an extremely rapid way of gathering valuable information – which would otherwise be difficult to obtain – and of seeing the system and its dynamics from a different angle. The performance is led by the body rather than the mind. We guide the participants to ‘feel’ situations instead of reasoning them. And it sometimes happens that we start the Social Presencing Theatre thinking that the problems to be solved pertain to certain aspects, but through the performance we realise there are other issues that need addressing.”

In Social Presencing Theatre – a technique which forms part of Embodied Learning – an established method must be followed, conceived by choreographer Arawana Hayashi and developed through research activities carried out by the Presencing Institute at MIT in Boston.

Participants can choose whether to take an active part in the performance (as actors), physically playing the roles of stakeholders in the relevant scenario, or to be observers, who pay attention to the dynamics of the performance and afterwards share what they have seen with the entire group.

“Prior to the performance, the stakeholders in the relevant context are identified”, Sandra continues. “In the case of our event based on the health system, we identified the roles of doctor, patient, Dr Google, the patient’s family, the clinical capacity (to view every aspect of the patient), research, funding, trust and technology. Social Presencing Theatre involves giving a voice to elements which are not physical people, but which play an important part in the system”.

And since the aim is to reveal what an organisation needs in order to evolve, the stakeholders represented always include the people on the margins of the system in question, together with the earth, understood as our planet and the best possibility for the future of that particular system.

“Sometimes additional stakeholders are added to those identified during the preparatory phase, on the suggestion of the group”, Sandra points out. “For example, in the health system event, the participants requested the insertion of non-medical staff as a legitimate party in the system. It may also happen that nobody offers to play a role we’ve identified. This means that particular element is not important in the context, so it is eliminated. In any case this is another point for reflection.”

To play these voluntary roles, each person is asked to find a space to occupy on stage and to assume a physical position; these are not dictated by reasoning but by the trust placed in their own bodies, without asking why.

“Once the positions have been taken up”, Sandra explains, we ask the person playing the role to say a phrase, what he or she feels that character wants to say, without thinking. We then ask the actors to get in touch with their emotions. After a few minutes – because when systems are under stress they tend to move in search of a new equilibrium – we check to see if anyone feels the need to change position, and we suggest they do so. Usually at this point one person moving causes others to move too, because within a system, any movement leads to a reaction. Once in their new positions, we ask each person to say something else. This new phrase therefore constitutes a portrayal of the natural evolution of the system, its evolutionary trend. The aim is actually to visualise new possibilities of action.”

The difference between the start and the finish, then, lies in the fact that the initial configuration represents the system as it is at the current moment, while the shift to the second configuration emerges as ‘movements’ that the system needs to make in order to evolve, to implement the transformation it seeks.

“When the performance closes, we begin what we call the debriefing”, Sandra concludes. “We ask the actors what struck them, how they felt, what surprised them, what they saw. The focus is always on the feelings and what’s felt by the body. And this is when the blind spots emerge. The facilitators then give a summary of what emerged. The important issues are presented to the decision-makers, helping them to take a different view as they evaluate what should be done, which measures to adopt and how to prioritise. This is a source of information that couldn’t be collected in any other way.”