At Knowmads I learned to think with my heart

Marina (42) is Brazilian and took part in the 2018 edition of Knowmads Summer School.    She arrived in Amsterdam in the middle of her sabbatical year after selling her company share in a graphic design studio that she set up in São Paulo. “Initially – she says – I wanted to sign up for Knowmads’ six-month program but it was not possible due to other commitments. So I decided to participate in the Summer School, as I’m trying to figure out what I want my next step to be and what I want to do with my life. “ 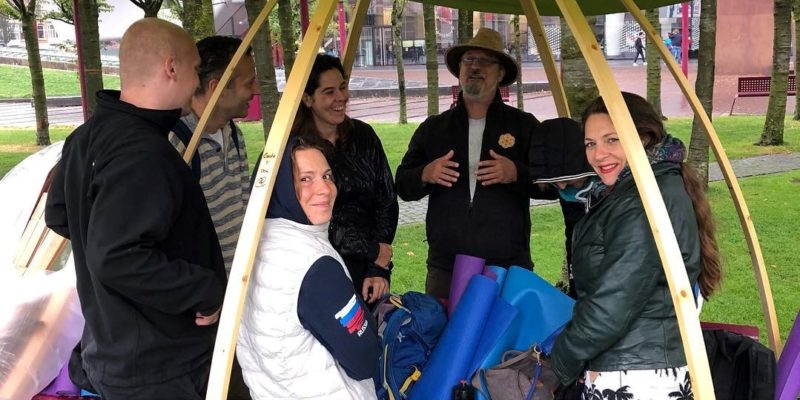 Beyond the Business Plan

“In Knowmads – she underlines – I had the opportunity to think about myself, my ideas and my projects, but not in a conventional way – like a traditional business plan methodology and the usual tools that we already know. Instead, I was able to focus on what I really feel, on what my heart is telling me, something apparently abstract, but certainly much deeper than the traditional way of dealing with new business activities. It is thanks to this approach that I could find in myself what I really love, but not only with the mind. Because Knowmads is one of a kind and has this special approach on ‘focusing exercises’ to teach people to think even with the heart. “

Learn to Think with the Heart

“The exercise I chose is called ‘Power to Flower’. It is inspired by Ghandi and supports to reflect on your own projects starting from your own thoughts, words, values and habits – successively,  and then bring them into action. To me it was really important to adopt this new, very profound approach. It was the pivotal moment of my week. It was enlightening, because I felt that I was learning to think with my heart. But I realize that it was part of a journey in which Pieter Spinder and the group of people who participated with me played an essential role. “

Free to Show Oneself

“I won’t say that going back home was difficult. But I realized that it is not easy to start putting the insights I had while I was in Amsterdam into practice. It’s hard to make them happen. Because meeting your feelings have nothing to do with money or with a trivial business plan. In fact, Knowmads is a sort of happy oasis. You really feel at home. It’s a place where they do not teach you things you can find in books. It is a context that helps you find yourself, in your professional and personal life’ what you like and what you really love to do. Where you can give yourself permission to be open and not to worry about the judgment of others. It’s a place where you can show vulnerability and fear and I think this makes a big difference.”